Welcome to Charlie Gillespie Corner, your newest fansite dedicated to the talented Canadian actor, Charlie Gillespie! You might recognize Charlie from his role as Luke Patterson in Netflix's series "Julie and the Phantoms!" This site aims to update you with all the latest news, photos, and media on Charlie’s career. Please feel free to take a look around the site and be sure to visit again soon!

(Video) Charlie Gillespie Talks About Working With Cameron Boyce, His “JATP” Castmates, And Other Firsts

A Night With Anthony Michael Hall

Hi Charlie fans! Yesterday, Charlie attended a benefit A Night with Anthony Michael Hall, to raise awareness of Multiple System Atrophy (MSA) at Tivoli Theatre in Downers Grove, Illinois. You can find some photos of Charlie from the event in the gallery and watch an interview below with other cast members from “The Class.”

Amazing news! Julie and the Phantoms has been nominated for 7 Daytime Emmy Awards! Congrats to all the cast, crew, and everyone involved! You can check the list of nominations below. The awards will be presented on June 25 in primetime on CBS and Paramount+.

The 2021 MTV Movie & TV Awards aired last night. After all our voting, Edge of Great won Best Musical Moment! So happy for all of the cast and crew. You can check out Charlie’s acceptance speech below! Now, let’s hope Netflix gives us a renewal for season 2!

Charlie went live on Instagram today (May 11). He sang the songs A Little Too Much, Crazy Little Thing Called Love, Girl Crush, and Unsaid Emily. You can watch it below!

Charlie Attending ‘Back to The Musical World’ Convention 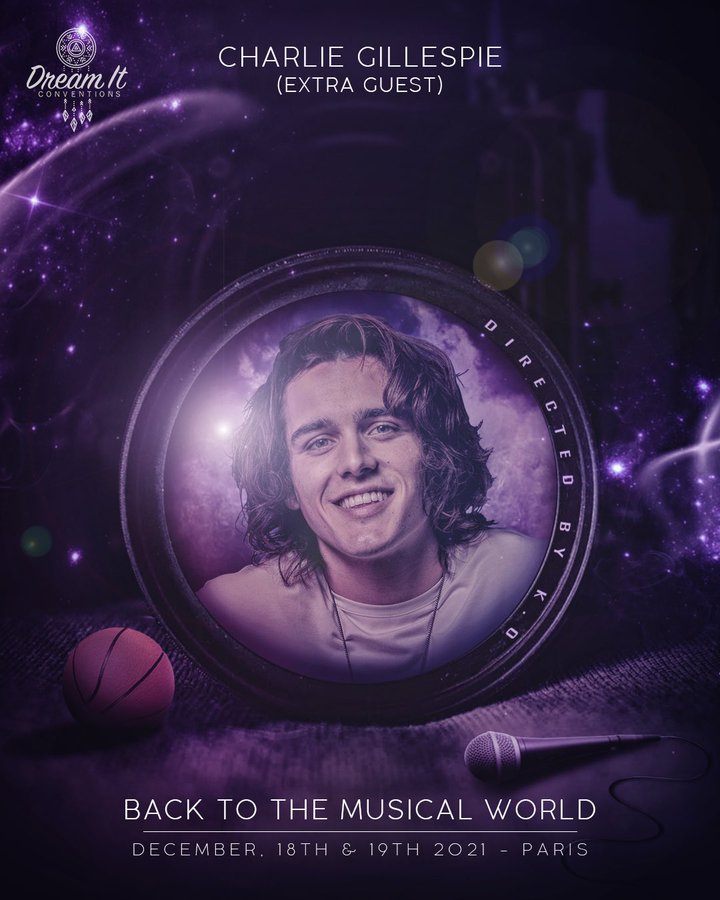 Charlie will be attending a convention called Back to The Musical World in Paris on December 18-19, 2021. Some other guests attending so far are Kenny Ortega and his co-stars Owen Patrick Joyner, Madison Reyes, and Booboo Stewart.

You can get more info on the convention from Dream It Con and get tickets here.

You can go to https://joinmnf.org/usa to use a template to send to your senator to ban the sale of shark fins in the United States!

Hello and welcome to Charlie Gillespie Corner, your newest fansite dedicated to all things, Charlie Gillespie. Charlie is most known for his role as Luke Patterson in Netflix’s series Julie and the Phantoms! He has also starred in other television series such as Charmed, Conséquences, 2nd Generation, and more. He has starred in films such as Speed Kills, The Last of Us, and La gang des hors-la-loi.

I watched Julie and the Phantoms in February and became such a huge fan of the show and of Charlie! I really wanted to make a fansite to show my support for him and his career. Thanks to my friend Jasper for the beautiful themes! The photo gallery currently holds 20,000+ images so far, varying from red carpet events, photo sessions, film projects, television projects, screen captures and more! I will continue adding more photos.

Feel free to browse the site, including the career page where you can read more details about Charlie’s projects. I am working on a video archive for the site and will get it online soon. You can follow us on Twitter at @gillespiecorner and on Instagram at @charliegillespiecorner. I hope you all enjoy the site and please come back again!

Save Our Thresher Sharks

Charlie is featured in Mare Nostrum’s video to spread awareness and help thresher sharks. You can sign the petition at https://www.joinmnf.org/save-our-thresher-sharks!

Charlie is featured in his friend Chevel Shepherd’s music video for her song Good Boy! Check it out below!

Julie is a teenage girl who finds her passion for music and life with the help of a high -concept band of teen boys (The Phantoms) who have been dead for 25 years. Julie, in turn, helps them become the band they were never able to be.

Neglected and unsupervised, a group of high school seniors are pulled into a downward cycle of violence.

The evolving formats of home video chronicle Mackenzie's life from birth to womanhood as she experiences its highs and lows alongside her childhood best friend, Lucas. Over the years, Mackenzie's struggle with depression worsens and she is forced to find the will to keep fighting alongside the people who love her most.

A true-to-life gritty portrayal of the issues that our young people are facing today.

Charlie volunteers with Mare Nostrum. Mare Nostrum's mission is "to create practical and lasting solutions for the conservation of our oceans." They focus on Marine Pollution, Overfishing, Climate Change, and more. Please check out more information at: joinmnf.org